You’re probably wondering why this blog about Charles Lindbergh has a post with that headline up there.  Let me tell you:  In 1953, six of the top ten non-fiction bestsellers in the United States were books with an overtly religious or spiritual theme.  One of them was Angel Unaware, an enormous success for country singer, movie star, and TV cowgirl Dale 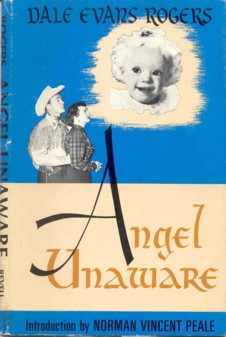 Evans, then at the peak of her TV-land popularity, shared with her husband and co-star, Roy Rogers.  The presence of so much religious feeling in the popular literary sphere in 1953 provides one of the contexts for assessing the impact of Lindbergh’s thrilling memoir/adventure story, The Spirit of St. Louis, which was also on that list of top ten books that year.  The Spirit of St. Louis was, in its way, another book of popular spirituality, a successor volume, in fact, to Lindbergh’s intensely meditative bestseller, Of Flight and Life (1946).   More on both of those, and more on the 1953 religious book boom, another time.

But now, what about Dale Evans?  Her 1953 book was–and still is–widely hailed as a breakthrough in public acceptance and understanding of children with mental disabilities. The “angel” of the title is Robin, the only biological child of Roy and Dale, born in 1950 with Down syndrome (“Mongoloid” or “retarded” in the parlance of the day), who died after a bout with the mumps in 1952.  Evans states clearly at the outset:  “Both Roy and I are grateful to God for the privilege of learning some great lessons from his tiny messenger,” and the rest of the book is suffused with Christian devotion.

I, too, was born in 1950, and as long as I can remember– say, from about 1954 on– I knew about (and idolized) Roy Rogers and Dale Evans.  I vaguely remember hearing about the Rogers’ family tragedies, unspecified at the time, but now I know.

One more Lindbergh-Dale Evans connection, though it’s not with Charles.  Dale Evans Rogers and Anne Morrow Lindbergh died on the same day, February 7, 2001.  Obituaries for both ran side-by-side the next day.  William Powers, writing in The National Journal, called attention to the pairing:

Dale Evans and Anne Morrow Lindbergh met all the requirements for obit nirvana. Each had been a cultural deity, and each lived to such an advanced age—Evans was 88, Lindbergh 94—that younger readers had but a faint (if any) awareness of them. Evans was “the Queen of the West,” as most of the obits noted. And Lindbergh was, in a way, the Queen of the East—the embodiment of an ideal to which a certain kind of elite East Coast woman aspired during the 20th century. Her 1929 marriage to Charles Lindbergh was the lead story on the front page of The New York Times. Later, she wrote a presciently feminist book, Gift from the Sea, which spent 47 weeks at the top of The Times‘ nonfiction best-seller list.

Both women’s stories had built-in dramatic tension. They owed their success partly to their marriages, yet both were so talented on their own that the marriages seemed to rob them of full credit. The Lindberghs were global celebrities who hated fame; the kidnapping and murder of their eldest child was the original media shark feast. Known as a singer and a cowgirl actress, Dale Evans wound up wishing she’d found her second career—Christian evangelism—before the first.