By this time (about 1 pm CDT on May 21) eighty-five years ago, Charles A. Lindbergh was just a few hours away from landing in Paris on his historic nonstop, solo flight across the Atlantic.  He had been airborne (and awake) for more than 30 hours, and he had finally caught sight of land–the southwestern tip of Ireland–for the first time since passing over Newfoundland and out over the open ocean. 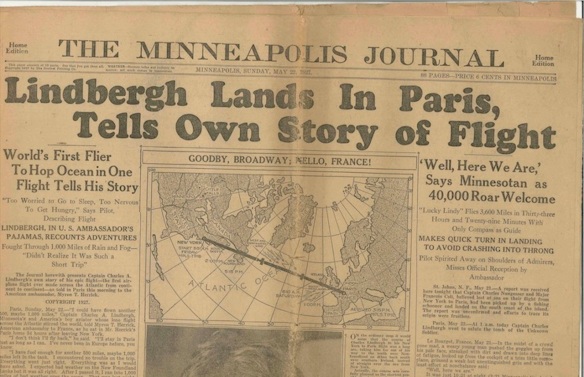 In The Spirit of St. Louis (1953), Lindbergh writes about flying over a little Irish village in nearly ecstatic terms.

People are running out into the streets, looking up and waving. This is earth again, the earth where I’ve lived and now will live once more.  Here are human beings.  Here’s a human welcome.  Not a single detail is wrong.  I’ve never seen such beauty before–fields so green, people so human, a village so attractive, mountains and rocks so mountainous and rocklike.  . . . I haven’t been far enough away to know the earth before.  For twenty-five years I’ve lived on it, and yet not seen it till this moment.  . . .  During my entire life I’ve accepted these gifts of God to man, and not known what was mine until this moment.  It’s like rain after drought; spring after a northern winter.  I’ve been to eternity and back. I know how the dead would feel to live again.