The sheer number of individual things — we can call them knickknacks, bric-a-brac, souvenirs, chotchkes, ephemera — that were “branded” with the Lindbergh name in the wake of the 1927 flight is nothing short of staggering.

As with much of the Lindbergh story, it is the towering scale of this tidal wave of STUFF  that is so impressive, and also, incidentally, the fact that most gets in the way of appreciating it.  We have become used to the oceans of “personality tie-ins” that we are drowned in every day that we forget that there was a time when this felt new, when the face and the name of a famous personage would suddenly be ubiquitous, unavoidable, “branded” on literally thousands of things.  The explosion of Lindberghiana in 1927 coincided exactly with American commercial culture’s first character tie-ins–that is, toys branded with Disney’s new cartoon star, Mickey Mouse, and ray-guns and other things from the sci-fi comic-strip hero Buck Rogers.

Surely there is a finite number of Lindbergh things, though there is no “catalogue raisonne” in the antiques marketplaces.  Not even the world’s greatest collector of Lindberghiana is willing to make a guess.  I met today with Stanley King, born a year after the NY-Paris flight and raised in the Bronx.  He began amassing his Lindbergh collection about 1947 or 1948, when he was about 20.  In spite of the popularity of this particular collecting niche–there is, of course, an affinity group, called the N-X-211 Society, after the number on Lindbergh’s plane– no one has ever come close to cornering the market like Stan King, a textile designer and manufacturer (and noted jazz musician and collector).  But in 2002, Stan felt he had more or less exhausted the possibilities, and made the immensely magnanimous gesture of donating his entire collection to the Smithsonian’s National Air and Space Museum.  Much of the collection is on display at NASM’s Udvar-Hazy Center at Dulles Airport, and the rest is in storage.  Images of nearly 800 items from the King Collection are available online at the NASM website.

This is one of my favorite pieces from the collection– a painted tin “Amusing Aviation Game.”  You insert a penny in the slot, strike a lever to “raise aeroplane,” and see how high you can get up a ladder of professional accomplishment, which starts at the bottom with “Cowboy,” and proceeds upward (though not very logically) through “Dunce,” “Street-Cleaner,” “Ball-Player,” “Fireman,” “Tramp,” “Millionaire,” “Actor,” “Fighter,” “Doctor,” and — finally– “Lindy.” 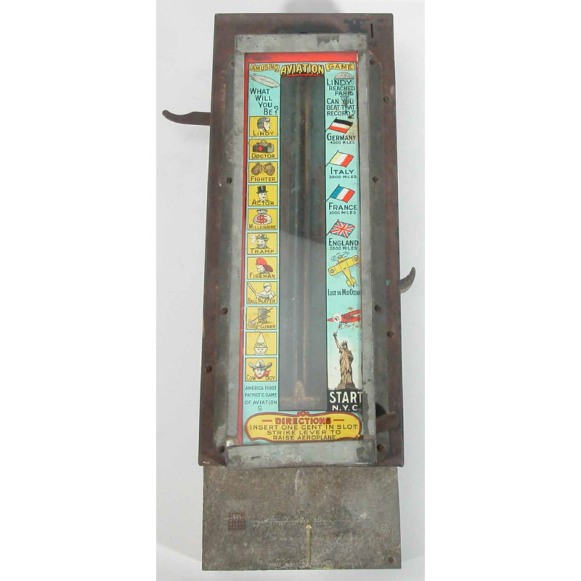