TIME magazine’s “Man of the Year” (more recently, “Person of the Year”) selection used to be an important cultural/political year-end milestone:  no other media outlet– whether another magazine, or a newspaper, or a radio or TV network– had so thoroughly cornered the market on “significance.”  The annual choice by this most popular and culturally influential newsmagazine was akin to the Oscars, or the Pulitzers:  Americans love to read about awards and about “Best of” lists; awards like the “Man of the Year” –such hubris!– used to have enormous cachet, before everyone got famous for fifteen minutes.  (SEE all of the Man of the Year TIME covers here.)

Early on, many of the Men of the Year were businessmen and industrialists, like GE’s Owen D. Young, or Detroit’s Walter Chrysler.  Soon, the selection settled into a fairly predictable lineup of presidents and world leaders, including FDR (three times), Hitler (1938) and Stalin (1939 and 1942).  There were occasional surprises:  Wallis Simpson was the first woman to be named (1936), the “American Fighting Man” was the first “generic” choice; the Ayatollah Khomeini, a controversial, but defensible, choice in 1978.  And there have been some gimmicky winners: 1982’s winner was “The Computer,” or “Machine of the Year;”  the winner in 2003 was “You,” that is, all of us creators of online content.

This year’s Person of the Year is–no surprise– President Obama, his second appearance, and it’s a terrific issue of the magazine, well worth a newsstand buy.

Charles Lindbergh was TIME’s first Man of the Year, appearing on the cover–since the magazine’s debut in 1923, in its trademark red border–on the first issue of 1928, more than six months after Lindbergh’s epochal New York-to-Paris flight.  The story goes that TIME’s editors were looking for a hook for selling more magazines in the usually slow January market, and that, additionally, they were somewhat chagrined that they had not yet featured a single cover with Colonel Lindbergh (as he was titled after returning from Europe to the U.S.) — a shocking omission, given the wall-to-wall U.S. media coverage of the young aviator hero since late May 1927.   But even if there had already been a long-established Man of the Year series, it’s hard to imagine how TIME could have chosen anyone else, so thoroughly had Lindbergh the Man– and Lindbergh the Mania–so thoroughly dominated the news of 1927.

The cover illustration is an attractive pencil drawing of the Lindbergh profile, signed by the aviator himself:  “The Man of the Year:  He defeated fame.”  The story inside is quite short, especially in comparison to the sprawling features in today’s Person of the Year issues.  It begins quite charmingly:

Feet: Large. When he arrived at the Embassy in France no shoes big enough were handy.

To date he has flown to France; Belgium; England; Mexico; Canada in the interests (his) of aviation progress and the interests (governmental) of international good will. In his own writings last week he pointed out the risks of flying over lonely Central American mountains. Remarked dissenters: “How much more lonely are the wastes of the Pacific; jungles below the Equator; tropic waterways of the East over which he must fly if his portfolio of Ambassador of Good Will is permanent.” Grumblers wondered if interest accruing to the national welfare by his flights is worth the calamitous crash of principal which would accompany his death. Col. Lindbergh is the most cherished citizen since Theodore Roosevelt. Thought they: “He is worth keeping.” One way to keep him is to keep him on the ground.

Others argued savagely that Lindbergh must fly for his life in the public eye; heroes age swiftly when seated at office desks; argued that by his very nature he must fly.

A horrific crime in 1927, now largely forgotten, has some eerie parallels with the tragedy in Newtown CT last weekend.  Andrew Kehoe, a disgruntled school handyman and one-time  school district treasurer in Bath Township, Michigan, planted massive explosives at an elementary school and blew up the building, killing 45 people, 38 of them schoolchildren.  It remains the largest mass murder at a school in US history. 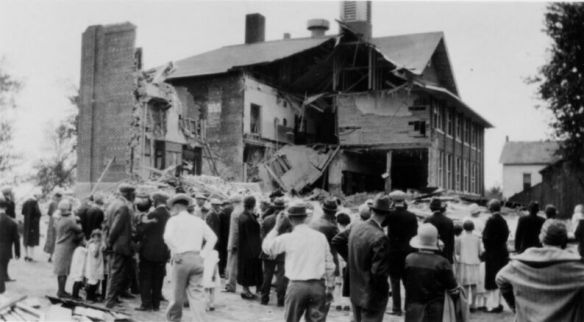 He had planned the crime for months, wiring the building and loading it with lethal explosives.  After killing his wife and blowing up his own house, he detonated explosives at the school, then drove to the school and blew up his car and himself and the school’s superintendent.

Why is this Lindbergh news?  Well, it isn’t, really. But the date of the Bath school explosion was May 18, 1927–just two days before Lindbergh took off on his historic flight to Paris, obliterating all other news stories in the day’s media.  The swift obscurity of the tragic news from Bath may also have something to do with the fact that it occurred in such a small town, in the nation’s “flyover” lands (before there were many people flying over it).  The immensity of the Lindbergh media phenomenon has a lot to do with the jumping-off point– New York City, center of the media universe–and the landing point:  Paris, the world’s most glamorous capital.  A mass murder of children in a small town in Michigan couldn’t compete with those sensational facts.