I’m pretty sure I have never thought about a connection between Charles Lindbergh and Global Warming, or rather “global-warming denials.”  But sure enough, Lindbergh’s notorious isolationist stance during the lead-up to World War II has inspired comparison with positions currently being staked out by the climate change “denial community.”   Lindbergh’s isolationism is cited by Huffington Post environmental columnist Edward Flattau: 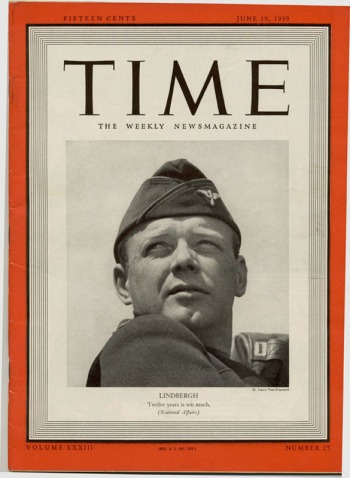 Virtually all the world’s nations participated in the crisis sessions of the recent global warming conference in Durban, South Africa to a daily drumbeat of incriminating evidence.

Yet Senator James Inhofe, (R-OK), didn’t seem impressed by the internationally shared concern or the reasons for it. One of the most outspoken skeptics of global warming, he ridiculed the purpose of the conference and warned that taking remedial action against a “phony” climate threat would cripple our economy.

Turn back the clock to the days immediately preceding World War II when German and Japanese armies threatened to spread totalitarianism across the globe. Uber-isolationist Charles Lindbergh, the famed aviator, was warning that if we were drawn into a shooting war with the Axis powers, a still depression-shaky American economy would buckle under crushing debt.

Flattau compares the arguments of the WW2 isolationists with those of today’s climate-change denialists, who argue that the respective threats–German militarism and devastating global warming–are, variously, exaggerated or fictitious; inevitable and unpreventable; possibly beneficial in the long run; etc.  He concludes that, although in the long run, America and the free world prevailed over Fascism, it’s unclear whether the “machinations” of the climate-change denialists “can be surmounted prior to the point of no return.”