From the opening of my chapter on Lindbergh’s first book, written in 1927, along with a photo of “Lindbergh’s Room” at the Guggenheim mansion in Sands Point NY, known as “Falaise”:

The “French eclectic” mansion was straight out of a Douglas Fairbanks swashbuckler. Built in 1923 on 90 acres on Long Island’s Gold Coast in Sands Point—the real-life stand-in for The Great Gatsby’s “West Egg”—“Falaise” was built for millionaire philanthropist and aviation enthusiast Harry F. Guggenheim and his third wife, Alicia.  In spite of the house’s size and architectural pretensions, many of its spaces are quite intimate.  In fact, “cramped” would not be an inappropriate description of the room into which, in June 1927, the house’s most famous guest, Charles Lindbergh, crammed his 6 foot, 2-inch frame, his feet no doubt reaching over the end of the room’s narrow bed. 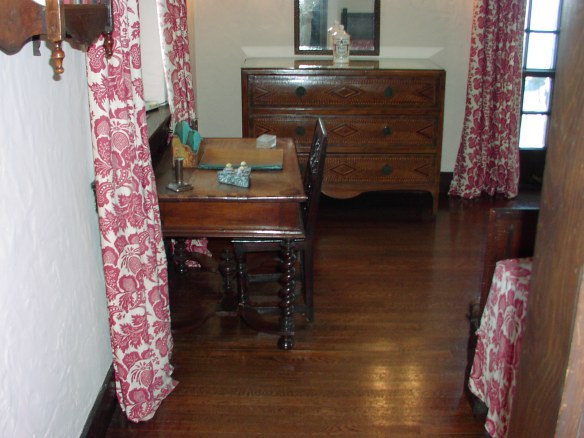 It feels like a dorm room at an old college, fitted out with that bed, a dresser, a mirror, creaky floorboards, no closet to speak of, a hard wooden chair, and a writing table not three feet wide.  This was where Lindbergh–the triumphant hero returned from his epochal transatlantic adventure, tickertape parades and public hysteria temporarily behind him—would sit for three weeks, every day, all day and into the night writing, in longhand, what would become his first book, which his publisher had decided would be called “We”.

I made the pilgrimage to Falaise not because of its gaudy architecture or its Gatsby associations, but precisely because of its place at the beginning of the “tale of Lindbergh,” or at least quite near that beginning.  It was in this place that the 25-year-old Lindbergh began the transformation, effected through the printed page, from a callow aviator-mechanic to worldly celebrity and memoirist.